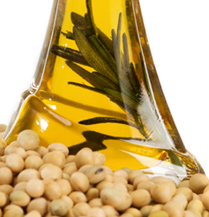 Soybean, a source of high quality protein, is one of the major oilseed crops in the World. In India, the Soybean produced is Non-GMO and this gives an edge to Indian Soybean Products over others.

To compliment its soybean processing activity in India, the KN Group has introduced a world-class refinery at Khandwa & Itarsi. This refined Soy Oil is now sold under its own brand name in neatly packed tins, cans & pouches.

The KN Group is also one of the most active players at Mumbai INPT Port for shipments of soy meal in break bulk as well as in containers. It even enjoys a favoured status with most of the prestigious & well established feed Millers & multinationals of high repute globally.

The Group is also into CNF sales to cater to its end buyers in various countries located in the Far East, Indian sub continent, Middle East, Africa & Europe. It has now established its foothold in Hipro Soymeal market with dedicated production capacity of 1000 MT (Metric Tonnes) per day.